No Result
View All Result

Innovation across dividing lines: combating domestic violence in the Republic of Moldova 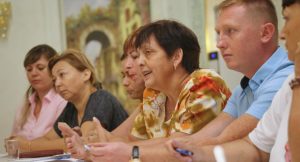 Olga Purakhina, the director of the NGO Vialex located in Transdniestria, raises her hand and begins to speak. Not into a podium microphone, but into the webcam of her laptop. Her audience, fellow practitioners all dedicated to combating violence against women, are seated not in a meeting room before her, but in offices and living rooms all across Moldova.

In the times of the COVID-19 pandemic, social distancing measures have not only changed the manner in which these activists meet, they have also complicated their task of assisting women who are victims of violent behaviour. A recent OSCE-led survey confirmed that domestic violence is an acute problem in many OSCE participating States, including the Republic of Moldova. And like everywhere else, the confinement of families to close quarters at home has caused the incidence of violence to rise.

“The crisis has made it difficult to counsel women in person, so we decided to produce online broadcasts with information about what to do if assistance is needed, and make them easily accessible online,” says Olga.

“They turned out to be surprisingly successful: over 400 views in a single day, as opposed to webinars we organized in the past, which sometimes attracted only ten participants,” says Olga.

The OSCE Mission to Moldova has organized this online forum for four NGOs, two from Transdniestria on the left bank of the Dniester/Nistru River and two from the right bank, to allow professionals to exchange their best practices in coping and adjusting to the new conditions.

“These info broadcasts are short and can be watched anytime during 24 hours,” says Olga, reflecting on their unexpected success. “They don’t require registration or a specific time commitment. We gave them titles such as ‘Improving family relations’ that appeal to a broad audience, to lower the threshold for watching. This way, important information about whom to contact if violence strikes can be spread as widely as possible. Potential victims need not fear the reprisals they may experience if caught viewing a post specifically about countering violent behaviour.”

Simion Sirbu, who directs the NGO Artemida in Drochia on the right bank of the river, takes the floor: “When women requiring protection do contact us, we need to accommodate them safely without increasing the risk of infection for themselves or those who are helping them. We have set up special quarantine accommodations where they spend the first 14 days. They are given support online, including legal aid and medical advice, and doctors even visit them if necessary. Once it is sure that they are free of the virus, we find appropriate placement for them and continue our assistance.”

Simion Sirbu, Director of the Centre for Aggressors in Drochia, Moldova.(OSCE/Igor Schimbator) 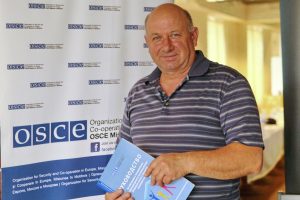 The OSCE Mission to Moldova has been co-operating with civil society partners for over a decade to improve the lives of survivors of gender-based violence. The Mission works to facilitate the achievement of a lasting, comprehensive political settlement of the conflict over Transdniestria, and combating domestic violence on both banks of the river is one of the confidence-building measures under the settlement process. “It is part of our core mandate to bring people together, to build bridges between the two banks,” says Otilia Bologan-Vieru, National Legal Office at the Mission.

“Over the years, the Mission has trained hundreds of judges, prosecutors and law enforcement officers on combating domestic violence, including on how to refer the victims and aggressors to social service providers. Since 2008 the country has a well-established national referral mechanism: each district has a multidisciplinary team consisting of social workers, doctors, a law enforcement officer and a public prosecutor. We have also assisted with the development of new legislation that forces aggressors to go through rehabilitation courses as part of their protection order,” Otilia explains.

One of the Mission’s key partners is the NGO Artemida, also known as the Drochia Centre, which has pioneered the simultaneous counselling of victims and perpetrators of domestic violence. The success rate has been remarkable – no recurrence in 95 per cent of the cases. “This is the most efficient approach: you cannot work just with one side of the problem and not with the other,” says Ina Gradinaru, a psychologist at the Centre.

Members of the OSCE Mission to Moldova visit the Centre for Aggressors in Drochia, Moldova.(OSCE/Vitalie Savin) 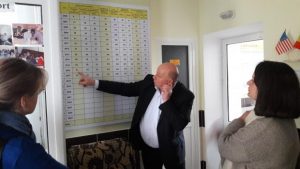 The Drochia Centre works according to the so-called Duluth Model, an innovative approach that takes the blame off victims, places accountability on the offender and involves the community in ending domestic violence. Last year, before the pandemic made travel difficult, the Mission arranged a visit for NGOs from Transdniestria and other parts of the country, including the autonomous region of Gagauzia, to the Drochia Centre to witness its methods first-hand.

In addition to bringing practitioners from the different regions of Moldova together, the Mission has created opportunities for them to acquaint themselves with innovations from farther afield. It organized a study trip to Sweden last year, which is at the forefront of innovations in empowering survivors of domestic violence. Municipalities allocate funds to each individual case, and not to one big pot for an NGO, allowing survivors to access and manage their own resources.

“This is very different from the top-down approach seen elsewhere, which encourages dependency on the part of the victim. Of course, the situation in Sweden cannot be compared one-to-one with that in the Republic of Moldova. But the visit sparked lively and constructive discussions, not only among the practitioners but also with the Moldovan authorities who also took part in the visit,” says Ala Vechiu, Senior Programme Assistant at the OSCE Mission.

Visits abroad like this one have several benefits all rolled into one. Not only are they a source of new ideas. The very fact that practitioners from the left and right banks were there together forged new ties between them, which have become important during the COVID-19 pandemic. “More than ever before, the NGOs from the left and the right banks are contacting each other, providing and receiving advice on specific cases,” says Ruslan Abdyldaev, Human Dimension Officer at the Mission.

The OSCE Mission to Moldova’s work to combat gender-based violence was nominated for the OSCE Gender Champion award this year. It was cited as an example of political confidence-building at its best, allowing good ideas to travel freely, so that people on both banks can benefit.

No Result
View All Result

The exchange of experience on good practices